You wake up in the morning and put on your nature influenced clothes.  You do not have to worry that it is raining outside today because water and dirt just roll off like drops on a lotus leaf.  You do not have to worry that the electricity is out because your clothes can create its own light through firefly-inspired bioluminescence which can also keep your smart phone charged.  No need for pockets. Anything you need to carry you can just stick to your clothes with the same Van der Waals forces that a gecko uses.  Do you think this is all a dream?  No, this is all possible and we have nanotechnology to thank along with some very important chemistry.

Nanomaterials abound in the living systems of nature and nanoscientists are examining the properties and potential uses of these natural nanostructures in an area of research called biomimicry. What types of nanostructures are found in nature? They include inorganic materials such as clays, carbonaceous soot (think carbon black), and natural inorganic thin films to a variety of organic nanostructures such as proteins and chitin (insect and crustacean shells) to organic structures such as wing ribs and epidermal projections.    These structures lead to a variety of behaviors in nature including the wettability of surfaces, the iridescence of butterfly wings, and the adhesive properties of the gecko foot. Let’s examine a few examples of these biomimetic structures. 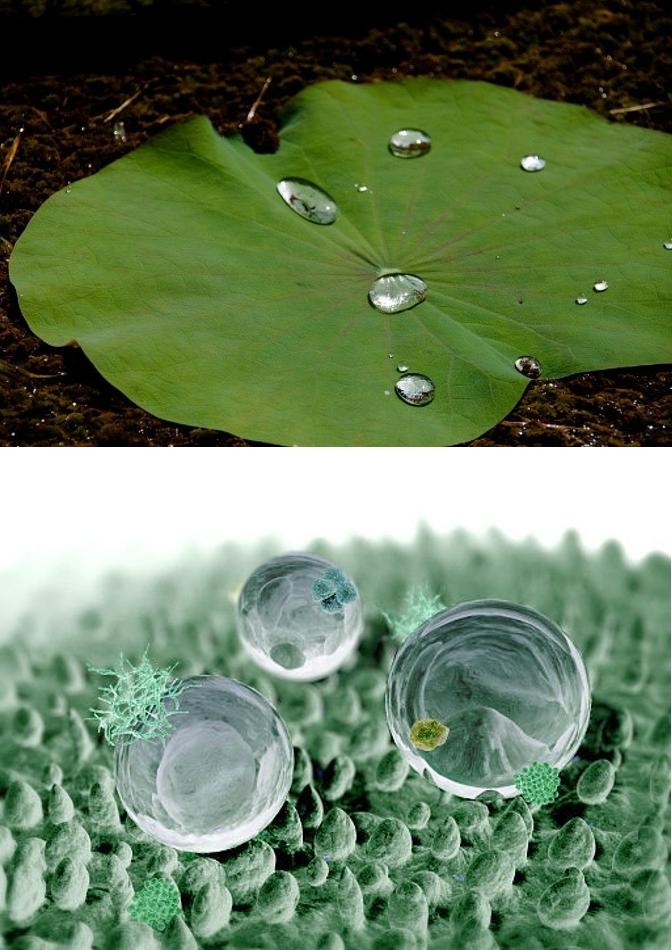 The Lotus leaf is an example of a surface, which due to the physical and chemical conditions at the micro- and nanometer scale, is able to produce a self-cleaning effect. Wilhelm Barthlott, a German botanist, is considered the discoverer of the Lotus Effect as he applied for its patent in 1994. This effect is the combination of the chemical make-up of the surface and the micro-and nano-projections on the surface. The protrusions are ~10 μm high with each protrusion covered in bumps of a hydrophobic, waxy material that are roughly 100 nm in height. The chitin polymer and epicuticular wax projections allow the leaf to trap air. The water droplets ride on the tips of the projections and resulting bed of air to create a super-hydrophobic surface.  Scientists engineered this behavior with the product Lotusan®  - a self-cleaning paint.  This paint mimics the microstructure of the surface of a lotus leaf once it dries and cures in the environment.  Tiny peaks and valleys on the surface minimize the contact area for water and dirt keeping the surface walls clean. Numerous products are now available that mimic this hydrophobic property including clothing, spray coatings, plungers, bathroom fixtures, automotive parts, etc.

at the bottom of the bloom.  The rim of the plant is completely wetable due to its hydrophilic surface chemistry and surface roughness. These features prevent the insect’s adhesive pads from making contact with the surface causing it to slip down the plant. Think of a car hydroplaning on a wet road or you slipping on an icy surface. Researchers at Harvard University have created similar omniphobic (it is “afraid of” or repels everything) materials that can be used as surfaces for biomedical fluid handling, fuel transport, or as a surface that repels ice thereby reducing energy needs in refrigeration.  This slippery liquid-infused porous surface (SLIPS) is made of a porous network of Teflon nanofibers that are infused with an oil- and water repelling fluid. Can you think of other uses for SLIPS? 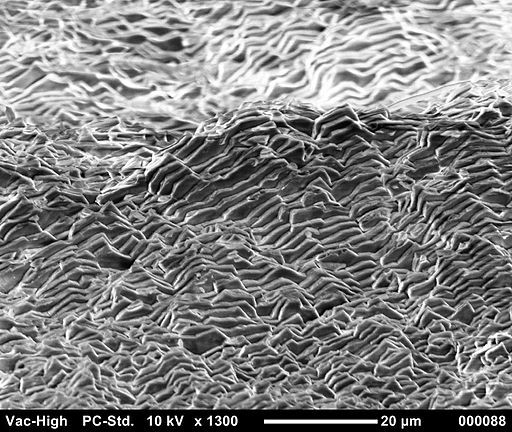 toughness. One of nature’s toughest materials is nacre which is the iridescent mother-of–pearl produced by mollusks. Mollusks create nacre by depositing amorphous calcium carbonate (CaCO3) onto porous layers of polysaccharide chitin.  The mineral then crystallizes, producing stacks of CaCO3 that are separated by layers of organic material.  Its strength is due to the brick-like assembly (interlocked) of the molecules. Researchers at many universities are synthesizing biomimetic nanocomposites to create strong materials for use in  light-weight armor systems, structures in transportation systems, durable electronics, and aerospace applications, among others.

We all learn that pigments cause the colors that we see but nature has another way of creating color which we call structural color. Some insect wings have ordered hexagonal-packed array structures made of chitin.  The variety of spacing (from 200 to 1000 nm) 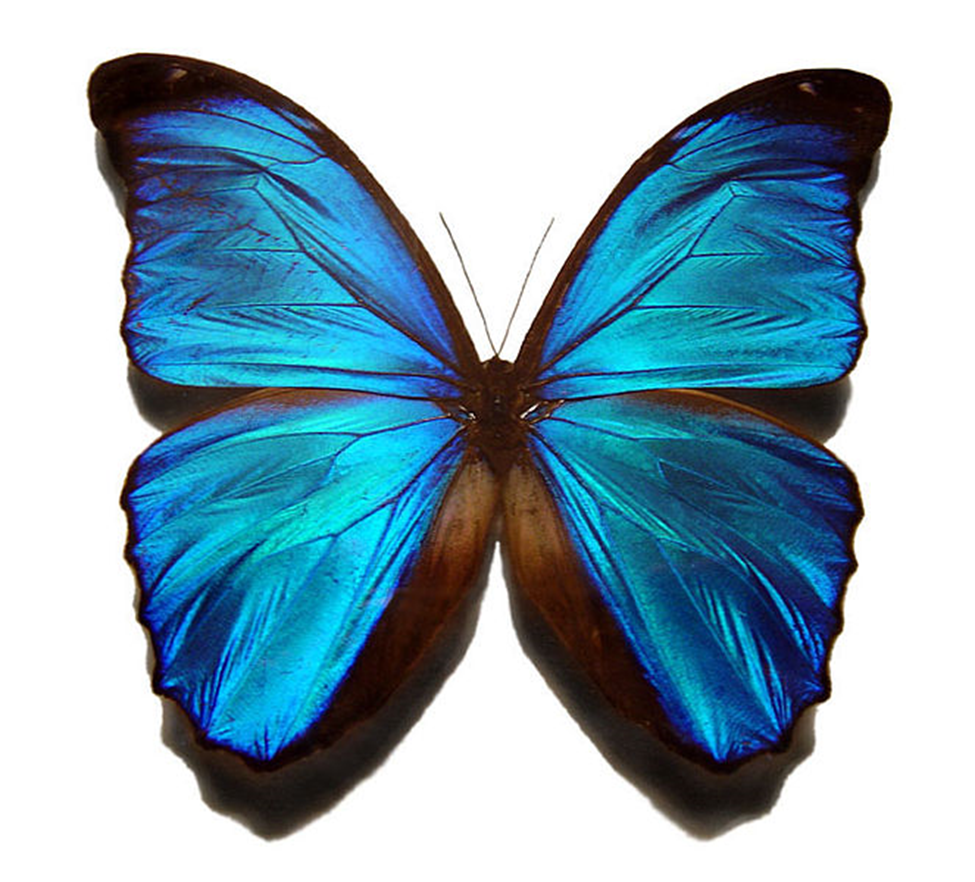 between these structures allow wings to serve as antireflective and self-cleaning coatings, provide mechanical strength, improve aerodynamics, and act as a diffraction grating that produces iridescence.  Iridescence is the result of the interaction of light with the physical structure of the surface. In the Morpho butterfly, the spaces between the ribs of the wing form natural photonic crystals resulting in the brilliant blue color. No pigment involved! Researchers are exploring these nanostructures as a means for controlling and manipulating the flow of light - very important in optical communication. In addition researchers have found that when they coat the Morpho wings with a layer of heat-absorbing carbon nanotubes the shift in reflected wavelength of light can indicate very small temperature changes.  These sensors could one day be used to detect inflamed areas in people or points of friction in machines.

The Tokay gecko has interested researchers for a long time because of its ability to cling to smooth surfaces.

The gecko foot can adhere to a surface and also release from a surface with ease.  Keller Autumn’s study of the foot has shown that it is covered with micro long projections called setae and each setae is covered with thousands of 200 nm long protections.  The ability of the gecko to climb along walls and ceilings is due to a combination of these very small nano projections finding minute spaces in the surface in which to adhere due to physical electrostatic forces such as van de Waal forces (intermolecular forces) between the foot and the surface. No glue involved! This study of the gecko foot has led to advancements in adhesives that can be applied and reused.

A moth’s eye has very small bumps on its surface. They have a hexagonal shape and are a few hundred nanometers tall and apart. Because these

patterns are smaller than the wavelength of visible light (350-800nm), the eye surface has a very low reflectance for the visible light so the moth’s eye can absorb more light. The moth can see much better than humans in dim or dark conditions because these nanostructures absorb light very efficiently.  In the lab, scientists have used similar man-made nanostructures to enhance the absorption of infra-red light (heat) in a type of power source (a thermo-voltaic cell) to make them more efficient!

We know that nature can produce many complex nanoscale structures and now researchers are exploring the natural world to learn its nanoscale secrets.  They are using nature as a model for manufacturing these same complex structures.  Nanotechnology can and will be used to enhance hundreds of products many of which we interact with in our daily lives.  As this research using nature continues, there will be many more breakthroughs that will lead to new devices and materials that will impact many aspects of society.